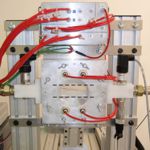 Classical hydraulics utilizes valves to change the volume flow in a hydraulic system. The basic operational principle is the adjustment of the flow path by means of the motion of a mechanical part, e.g. the valve spool. In contrast, electrorheological fluids (ERF) allow to directly influence their rheological properties (i.e. the apparent viscosity) by applying a sufficiently large electric field. This, in turn, allows to change the volume flow in a hydraulic circuit without any mechanical motion. Since the electrorheological effect is very fast (in the range of a few milliseconds), ERF can be utilized to build very fast hydraulic actuators. Furthermore, the resulting construction is kept very simple since there are no complicated mechanically moving parts.

In this research project, several applications in the field of valve constructions, linear actuators and automotive suspension systems, and shock absorbers in maritime applications were considered. The basis for all results was a detailed mathematical modeling of the ERF by means of a continuum mechanical model, which describes the stress as a function of the electric field strength and the shear rate. The characteristics of the shear stress as a function of shear rate is depicted in Fig. 1 for a typical ERF. 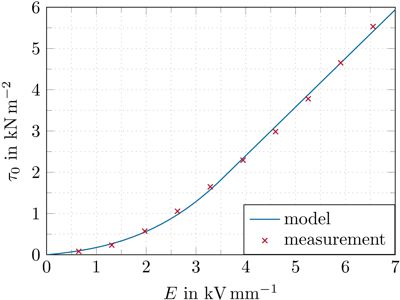 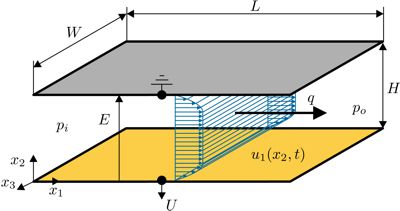 Basic setup of an ER valve

The dynamics of this change of the flow of the ERF is, as already mentioned, very fast. Fig. 3 depicts the characteristics of the fluid velocity \(u_1\) of the ERF in the valve (depicted in Fig. 2) for changes in the voltage and the pressure, respectively.

Change of the fluid velocity in an ER valve for changes in voltage and the pressure, respectively

Cross-sectional view of an ER-damper

The possibility to directly influence the characteristics of an ERF by means of an electric field enables to control the flow of ERFs by means of a suitable shaping of the electrodes. A possible application are digital electrorheological valves, which were developed in a further cooperation with Fludicon. The basic idea is to change the flow resistance by means of switching on and off a number of serially connected ER valves. This allows to utilize cheap high voltage power supplies with constant voltage. Utilizing e.g. a binary coding of the length of the electrodes, very small step sizes of the flow resistance can be obtained by a rather small number of serially connected valves, cf. Fig. 5. Possible applications are again semi-active automotive suspension systems.

For the test of the characteristics of the ERF and the ER valves, a test bench was set up. Utilizing transparent electrodes, this test bench also allows to directly monitor the flow of the ERF in the valve and thus to draw conclusions on the flow patterns, see Fig. 6-

ER test stand and the electrodes of a digital ER valve

The subsequent videos show measurement results obtained on this test bench. The first video shows the digital ER valve depicted in Fig. 6, and the change of the flow through this valve due to the activation of the different parts of the valve. A possibility to actively control the flow of the ERF is studied in the videos 2 and 3. Here, a sinusoidal flow path is generated by suitable electrode shapes, which allow to block parts of the flow path by applying an electric voltage. The results of this experiment could be utilized to build an ER valve in matrix setup, which allows a freely configurable connection of several in- and outputs without any mechanical components.