Crazy Robots is a science communication project of the Vision for Robotics Group, funded by FWF Wissenschaftsfonds. The project aims to teach school students robotics from the product development perspective and addresses all students (not only the ones interested in Science, Technology Engineering, and Mathematics – STEM). A specific feature of this project is the user-centered design approach which focuses on the interests of students and teachers and involves other stakeholders like parents.

The concept is based on the “5-step plan” and the “project assignment with Mattie robot”. Both concepts and the robot were developed for children. The researchers follow two main goals: 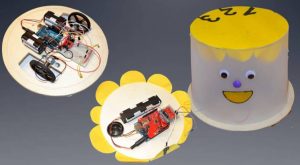 The project started on March 2014. After a phase of planning and development pilot schools were contacted. Since October 2014 the implementation is under way. Five high schools from Vienna take part in the project with a second or third class (and their teachers from handiwork or physics).

It starts with ideation in the first workshop “concept”, where students develop their first robot ideas with the help of the 5-step plan – a simple yet effective structure for their ideas – which they convert into a clay model.

For the second workshop “experts”, the class visits the Vision for Robotics Lab and meets robotics experts who talk about their work – computer vision – during a demo. After this, the students receive a project assignment from the CEO of the Crazy Robots Inc. to build a first prototype of a robot for kids. Each student can decide to be in one of the following teams: engineering, human-robot interaction, research&development, design or sales&marketing.

In the third workshop “evaluation”, the different teams reunite and integrate the robots parts. Then, the prototype is evaluated from two perspectives: technical and user. Finally, the product idea is presented to the CEO and the prototype is demonstrated. Between workshops, teachers have the possibility to discuss lessons learned in class.