Clutter in an open world is a challenge for many aspects of robotic systems, especially for autonomous robots deployed in unstructured domestic settings, affecting navigation, manipulation, vision, human robot interaction and planning. 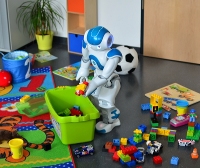 Squirrel addresses these issues by actively controlling clutter and incrementally learning to extend the robot’s capabilities while doing so. We term this the B3 (bit by bit) approach, as the robot tackles clutter one bit at a time and also extends its knowledge continuously as new bits of information become available. Squirrel is inspired by a user driven scenario, that exhibits all the rich complexity required to convincingly drive research, but allows tractable solutions with high potential for exploitation. We propose a toy cleaning scenario, where a robot learns to collect toys scattered in loose clumps or tangled heaps on the floor in a child’s room, and to stow them in designated target locations.

We will advance science w.r.t. manipulation, where we will incrementally learn grasp affordances with a dexterous hand; segmenting and learning objects and object category models from a cluttered scene; localisation and navigation in a crowded and changing scene based on incrementally built 3D environment models; iterative task planning in an open world; and engaging with multiple users in a dynamic collaborative task.

Progress will be measured in scenarios of increasing complexity, starting with known object classes, via incremental learning of objects and grasp affordances to the full system with failure recovery and active control of clutter, instantiated on two different robot platforms. Systems will be evaluated in nurseries and day cares, where children playfully engage with the robot to teach it to how to clean up.