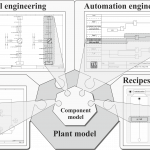 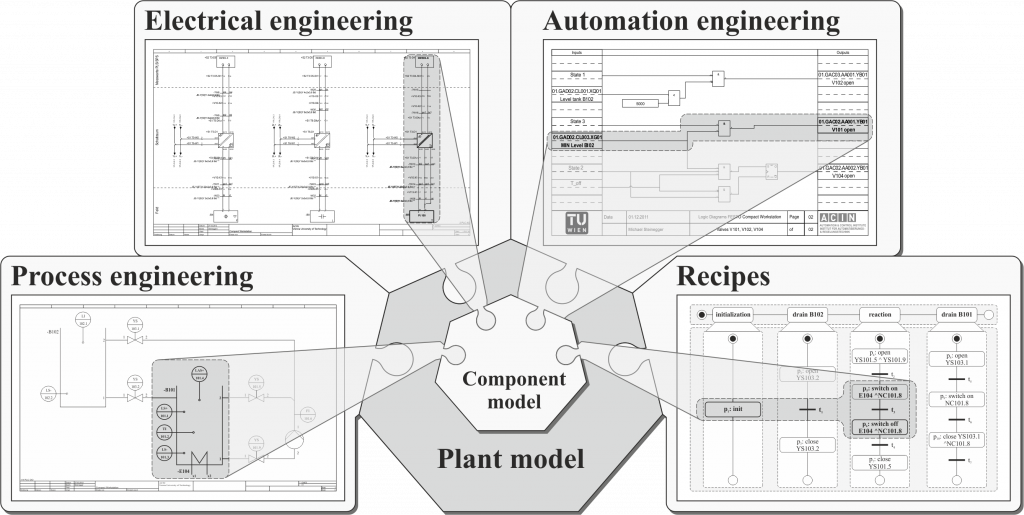 The engineering of highly automated production systems involves a variety of experts from different engineering disciplines, where most of them contribute at least to a sub-part of the control application for the engineered plant. One of the main objectives of today’s research activities in industrial automation is to simplify the engineering process for control and monitoring applications. The most promising approaches is to design and apply standardized software components, which enables non-experts to design such control or monitoring applications on a more abstract level as shown in Fig. 1. Such a software component has to meet several requirements. It has to contain and provide the description of aspects of the plant, control application and possible faults (hardware as well as software specific) in a standardized way. Furthermore, information about the interface, component behavior, and provided or consumed services have to be provided. 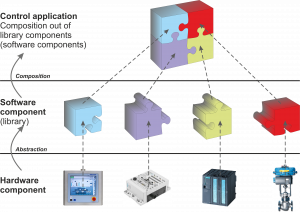 Modular design of control applications based on software components

The project scope includes the development of a library of standardized software components. Such software components enable a simplified implementation of industrial control applications by composition of such components on an abstract level. Furthermore, the library components already define integrated basic control functionality of the underlying hardware component and provide services for connecting several components in a flexible manner with each other (application integration). The provided library can further be easily extended by the users (engineering of new components or extension of existing software components). Thus, the implementation of the control sequence is realized with standardized modules, provided component services, and integrated control functionality. Also a hierarchical aggregation and modelling of the software component is possible. The control specification created by the application engineer can then be automatically transformed into executable control code, e.g. for Programmable Logic Controllers (PLCs). Furthermore, the automatic code generation based on knowledge-based approaches enables the generation of control functionality, where its specification is elaborated during preceding engineering phases in standardized engineering artifacts (e.g., wiring diagrams, piping and instrumentation diagrams, mechanical plans).

A major goal of the project – beside the above mentioned simplification of the engineering of control applications – is the automated generation of a reliable system to detect and identify abnormal system states. Every unexpected failure in a production plant entails the possibility of damages and downtime due to emergency shutdowns. To shorten the downtime and to support repair work and maintenance, the integration of a fault detection and identification (FDI) system is necessary. The implementation effort of such systems in modern production plants grows disproportionately with the complexity and size of the plant.

By adding the aspects of fault detection to the library components, the automated generation of a FDI-system is enabled, leading to a considerable reduction of implementation effort. Furthermore, the system is highly flexible and scalable, due to the encapsulation of functionalities in software components. Since the concept is based on engineering data, the system can already be used during commissioning of the plant, thereby shortening the commissioning time.