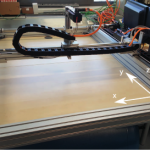 The improvement of the process changeover of modular manipulators offers enormous potential for process optimization in small-series production. Current handling devices can not be converted quickly to new products and production processes sufficiently. Especially for SMEs, the cost of retrofitting the production plant usually exceed the benefits, which is why they cannot compete in the market.
In this project specifically the aspect of modularity and rapidly (re-) configurability of handling systems for small series production are examined. The aim of this project is to investigate and develop methods that allow non-automation experts to configure multi-axis handling device and put them into operation with little effort. They will thereby be able to construct specialized handling systems from standard automation components, such as linear axes, pneumatic cylinders, rotary actuators and commercial control platforms (e.g.: PLC, industrial PC). Especially iterative learning control is considered for use, as this kind of control is particular useful in such applications, as on the one hand they are able to carry the usual repetitive production tasks more quickly than conventional control, and on the other hand, can accurately comply with poor or unknown models and parameters and precisely track the desired trajectory. These properties lead to rapid start-up, increased throughput, and minimal waste in small-series production.

In this project multiple Iterative Learning Control (ILC) algorithms have been reviewed. Two common ways to implement an ILC have been realized for the test system. The first method is the so called inversion based ILC. After an identification of the plant the ILC starts with an inversion of the plant. If the plant dynamics is exactly known then the transfer function from input to output equals one. To suppress noise and model errors a filter has to be used to stabilize the ILC.

The second method is the norm optimal ILC. This method optimizes a cost functional which weights the error of the output, the input and the change of the input signal.

The goal of this project is to implement ILC directly on standard PLC’s for reconfigurable robotic systems. As PLC a Beckhoff software PLC called TwinCAT is used. To verify the implemented algorithm a gantry robot of Figure 1 is used. To calculate the ILC on the PLC a three phase model is developed. 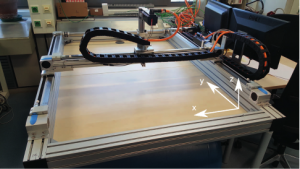 Gantry robot which should be controlled by the PLC.

To determine the performance of the developed system a trajectory is generated form 200 mm to 600 mm. The ILC starts with an intentional model error and is compared to a standard Beckhoff PID controller. 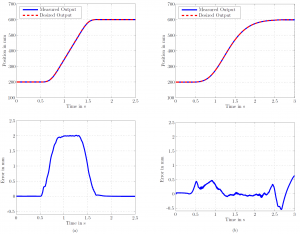 It can be seen that the norm optimal ILC reduces the maximum error of 2 mm to 0.62 mm after 100 Iterations. Because of the intentional model error the ILC is in the first iterations poorer than the feedback control. After the 26th iteration the break even point is reached, which means, that the error of the ILC is smaller than the feedback control.

Financial support of the Austrian Research Promotion Agency (FFG) under grant no. 848623 is gratefully acknowledged.