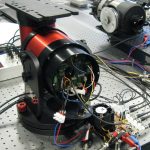 The precise tracking of high velocity satellites with ground based optical telescopes is a prerequisite for a number of future applications such as optical satellite communication, observation of space debris or satellite laser ranging. To achieve this goal, good mechatronic design as well as high performance control are necessary. Together with our industrial partner, ASA Astrosysteme GmbH, this project aims on increasing the achievable precision and tracking velocity of existing ASA ground stations.

To achieve the required precision the mechatronic design of the direct-drive telescope mounts a detailed analysis of the existing system is necessary. Dynamic error budgeting (DEB) is used as analysis  tool for this purpose. Based on this analysis various system level improvements have been made, such as the improvement of the current sensor, as shown in Fig. 1, which results in a factor 6.3 improvement in achievable precision. DEB is also used as design tool to guide the development of the improved current sensor system, as shown in Fig. 2. 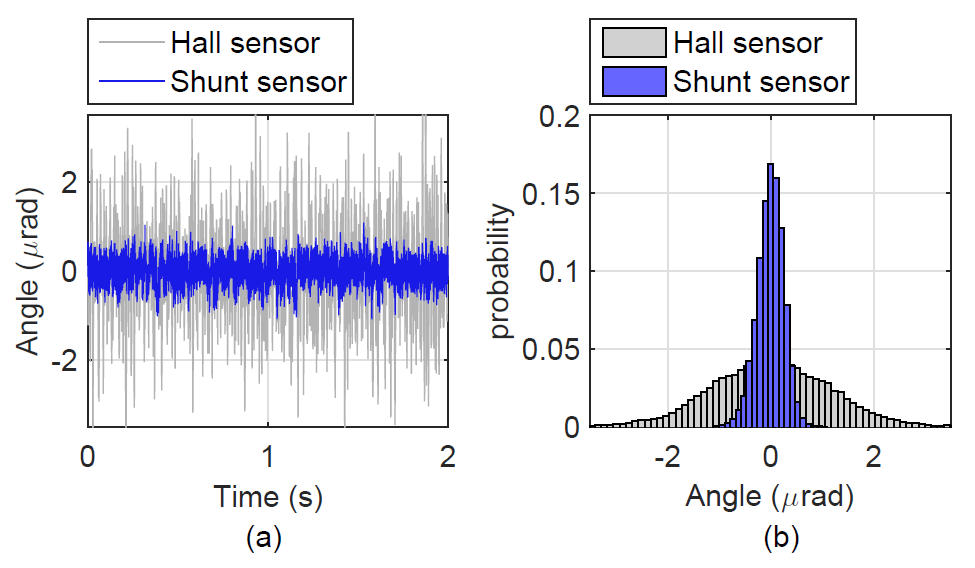 Measured position error for two different current sensor systems. Using an improved sensor, the achieveable precision is impoved by a factor of 6.3. 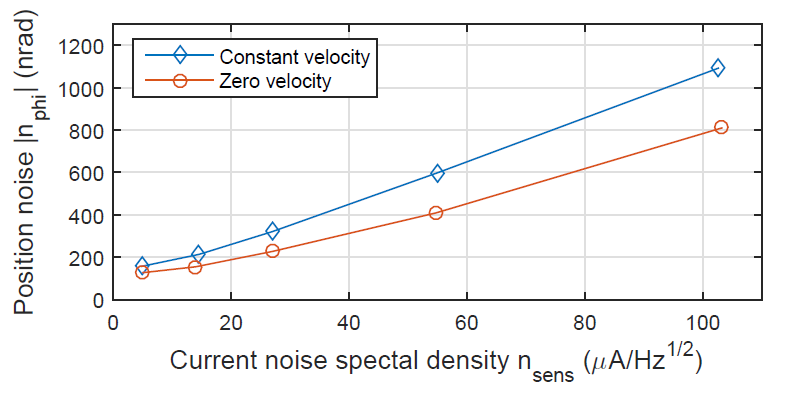 Simulated relationship between the noise spectral density of the current sensor and the position noise of the rotor for constant velocity of 0.2 °/s and zero velocity.

Using the modified version of the telescope mount the influence of the switched operation mode is analyzed. Using a relative low switching frequency implies maximal efficiency of the amplifier but may also degrade the performance. To verify the simulation, the PWM switching frequency is varied, and the position error at various velocities is recorded. The data, shown in Fig. 3, experimentally confirm the simulation result. 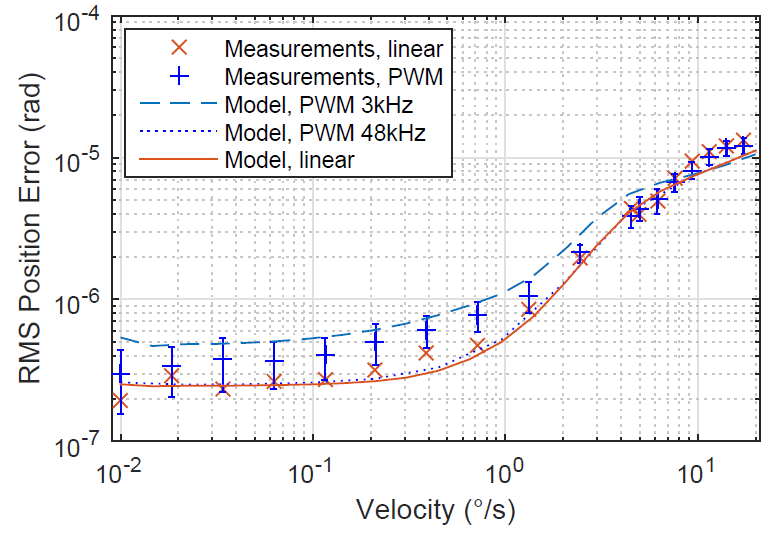 RMS position error as function of the velocity in linear mode in comparison to switched mode. Error bars are shown for the measurements in switched mode, marking the measured range from 3 kHz to 48 kHz.

The motion control system of the direct-drive telescope mount was enhanced. Instead of the previously used cascaded PID control, a model based state feedback control with disturbance observer is applied. Using this advanced control concept, external disturbances, such as wind shake or torque disturbances, can be effectively suppressed. This allows to maintain high precision even at the high angular velocities necessary for satellite tracking applications. Experimental verification with visual feedback is performed using various rocket bodies and satellites. An exemplary tracklet of the rocket body Breeze-M is shown in Fig. 4. A comparison between the implemented control concept and conventional PI control of the tracking performance of 43 tracking experiments is shown in Fig. 5 and reveals a factor of 3.8 improvement in precision. 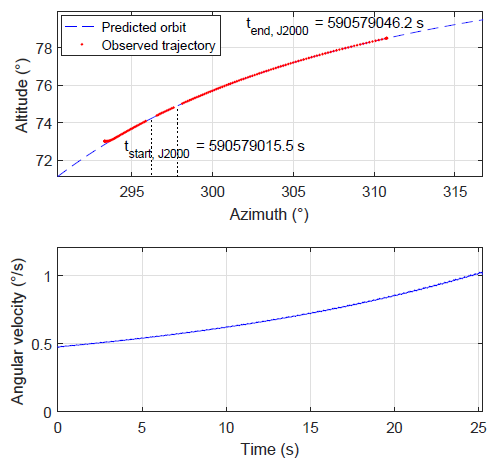 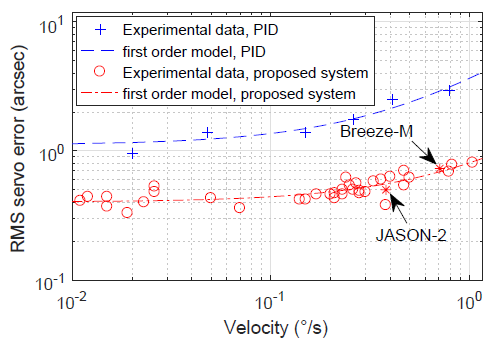 RMS servo error using standard PI control (blue, dashed) in comparison to the proposed control system (red, dash-dotted). Shown are the RMS servo errors of the performed tracklets as a function of the mean tracklet velocity.

Iterative learning control is applied to improve the accuracy of the satellite tracking system. The desired satellite trajectory is pre-calculated and trained shortly before the actual satellite pass. The star background together with a plate solving algorithm, which identifies the astrometric coordinates of a given star pattern, is used as absolute position sensor during the training phase. This trajectory learning phase with sensor feedback allows the elimination of static, as well as dynamic errors within the telescope system. Tracking experiments using LEO as well as MEO satellites are conducted to confirm the improved tracking accuracy of the tracking system. The result of an exemplary trackle is shown in Fig. 6. Using the implemented trajectory learning algorithm, the visual tracking result is improved by a factor of six to 11, as shown in Fig. 7, and only limited by the used orbit prediction algorithm. By improving the accuracy of the tracking, residual motion of the tracked object within the image plane is removed. 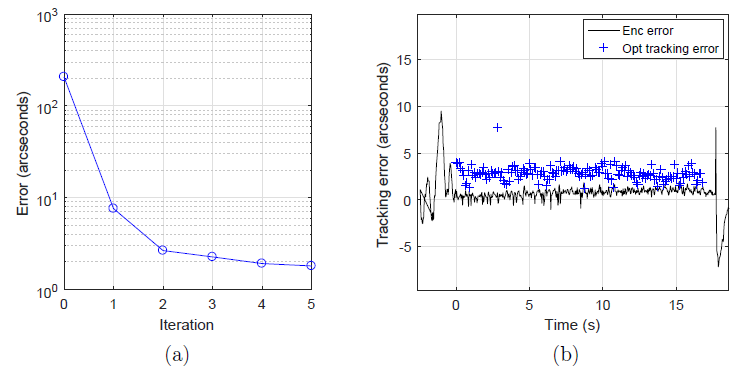 Tracking error of the satellite LAGEOS-2 (NORAD ID: 22195) on 17th of September 2018. (a) tracking error during the learning process as a function of the number of performed iterations and (b) internal encoder error (black, solid) and optical tracking error (blue cross) during the final pass at 22:22:18 UTC.

A few exemplary videos of the achieved tracking results can be found here: Lageos-2, AJISAI, Jason-3

Utilizing the proposed algorithm together with the optimized system and controller design, the implemented tracking system can be used as a cost effective optical ground station for highly accurate and precise blind tracking of satellites. By also applying continuous orbit refinements based on the observed orbit should also allow a significant reduction of the orbit prediction uncertainty that is currently limiting the accuracy. This should enable an accuracy that is within the achieved sub-arcsecond precision. This will enable a wide range of users to gain access to a range of applications, such as optical satellite communication, satellite laser ranging or space debris observation.