System conept of active vibration compensation enabling high precision robot-based surface measurements of free forms. A stiff link between the measurement tool and the sample surface is established by means of feedback control.

Within the scope of this project, a vibration compensating measurement module is developed. This module is used as an end effector and coarsely aligned by the robot arm. The actuated platform, which carries the high precision measurement tool, compensates for disturbing vibrations in 6 DoFs by means of feedback control. A stiff link between the measurement tool and the sample is established, maintaining a constant alignment of the tool with respect to the sample surface.

The feasibility of the system concept has been shown for horizontal operation orientation in the project aim4np. The goal of this project is to enable contact-less high precision robot-based measurements of free form surfaces by a measurement module with orientation-independent system performance.

To mechanically decouple the measurement platform from the robot arm, (quasi-)zero stiffness actuation is desired. Therefore, eight voice coil actuators are utilized to levitate and actuated the platform in 6 DoFs within the airgap between coils and magnet housings. By use of FEM analysis tools, the structural stiffness of the platform is analyzed, aiming for a high position control bandwidth and vibration compensation capability. Good decoupling of the DoFs is ensured by a balanced design, avoiding unintended torsional motion through actuation and keeping the subsequent control effort at a low level. The system is deliberately over-actuated, providing high peak forces, and the arbitrary operation orientation of the entire system. An integrated sensor system determines the actual position of the moving platform with respect to the supporting frame, while tracking sensors are used to measure the distance and orientation between platform and sample. 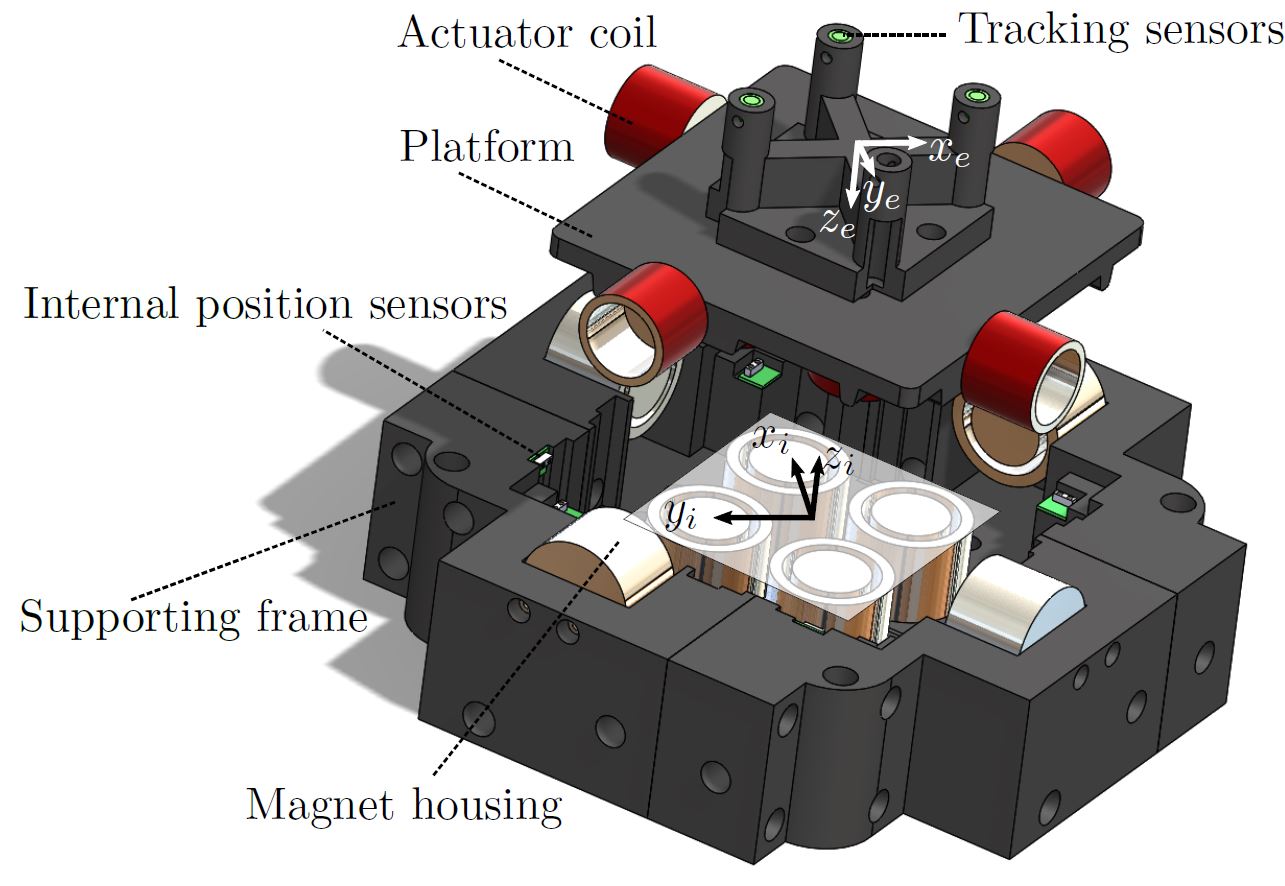 Model-based control techniques are applied to ensure a robust and high-performance positioning of the electro-magnetically actuated platform. A system model is built to decouple the MIMO plant, resulting in the implementation of a SISO controller for each DoF. A transition scheme is researched to operate the system in two different control modes, the stabilization of the platform with respect to the supporting frame and the tracking control of a sample surface.

By manipulating the optical path of a 1-D confocal chromatic sensor with a high performance 2-D fast steering mirror, 3-D imaging is enabled. Using a CMOS camera, calibration data is acquired for a precise image reconstruction. The developed 3-D tool is capable of performing fast overview images and high resolution scans of arbitrary region of interests. The lateral scan range is about 350µm x 250µm, with scan speeds of up to 1 frame per second. The achieved lateral and axial resolution is 2.5µm and 7nm, respectively.