In the research area Hot Strip Rolling, advanced nonlinear process control problems associated with the operation of a roughing mill and a tandem hot-strip finishing mill are solved. Rolling mill like the one shown in Fig. 2, constitute nonlinear MIMO dynamical systems. Their behavior is characterized by input, state, and time constraints, time variance, uncertainties, and a continuous mode of operation. Because of these special features and real-time requirements, the control tasks associated with these rolling mills are rather complex. In process control, cascade control concepts are often employed to deal with this complexity. Based on this hierarchical strategy, modeling and design of subordinate control loops are addressed first. In a second step, controllers for superordinate MIMO control loops are developed.

Sections of a rolling mill.

A hydrodynamic roll gap model, which assumes a two-dimensional visco-plastic material flow in the roll gap, is developed. In combination with tailor-made material models for the yield stress and the dynamic viscosity, this model can describe the complex deformation behavior from the first to the last mill stand. Furthermore, this model can capture the effects of oil lubrication, rolling speed, and asymmetries in the roll gap. Oil lubrication is of great interest because it reduces the roll force and the total energy consumption but it can also induce disturbances for the thickness control. Moreover, a mill stand model was developed, which captures the dynamic behavior of the hydraulic actuators, the elastic deformation of the roll stack and the deflection of the mill stand housing due to the applied roll forces.

Furthermore, dynamical models for the lateral contour and the lateral motion of the strip, the material flow in longitudinal direction, and the strip tension between two adjacent mill stands are developed. For the considered roughing mill, also the effect of lateral forces, e.g., applied by edger rolls, is investigated. These comprehensive models of the complete rolling process are validated based on industrial measurement data and are used for controller design, estimation of non-measurable quantities, and for advanced simulation studies.

Based on the mill stand model, a new feedforward control concept for the strip thickness is developed. The concept is based on the two-degrees-of-freedom control structure shown in Fig. 3 and systematically takes into account known disturbances from upstream process steps. In the feedback loop, an automatic gauge controller (AGC) is used. 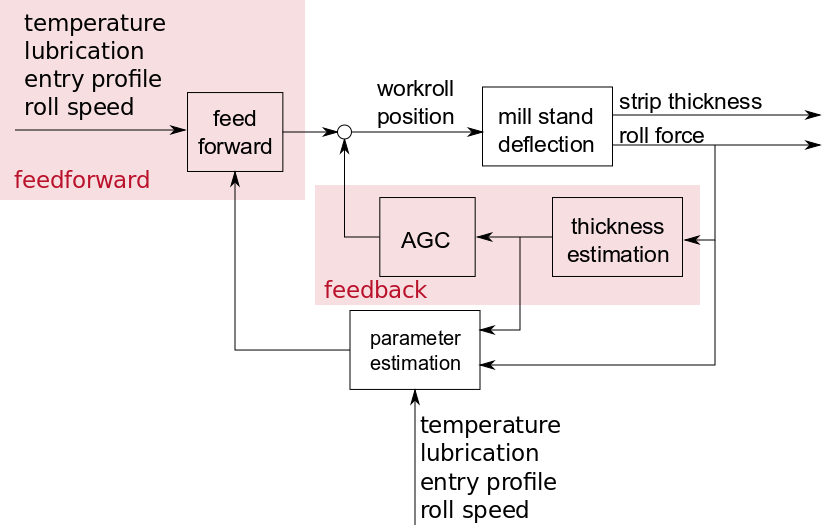 The developed feedforward controller chooses the system inputs based on an optimization problem that minimizes the deviation between the predicted and the desired strip thickness profile. The approach systematically compensates for thermal inhomogeneity, inhomogeneous entry thickness, lateral asymmetries, and oil lubrication effects. Because the material parameters are often uncertain and measurement signals including product tracking may be inaccurate, an additional parameter estimation algorithm makes the feedforward controller adaptive. The developed adaptive feedforward controller was successfully implemented on the tandem hot strip rolling mill of voestalpine Stahl GmbH. The controller significantly improves the thickness accuracy of the final steel strip.

A control strategy for the lateral motion and the contour shape of the plates is developed for the roughing mill. An accurate geometric shape of these plates is essential to meet safety and quality requirements at the subsequent tandem hot rolling mill.

The longitudinal tension in the strip is another important process variable to be controlled. For this purpose, a MIMO mass flow control strategy defines the rolling velocities at the individual mill stands and uses looper rolls to ensure a predefined strip tension between the mill stands. Figure 4 indicates the multiple interfaces and physical interactions this controller needs to deal with.

Interactions between the mill stands.