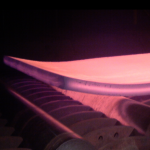 In heavy plate rolling, the customer demands on product thickness and flatness quality steadily increase. The quality is primarily influenced by the rolling process at reversing mill stands. Here the heavy plates are rolled out to a certain product thickness in consecutive passes. To increase the product quality, physical models serve as a basis for optimized control concepts.

To achieve the desired plate thickness, a precise product tracking of the heavy plate is necessary. To this end, an analytical forward slip model based on visco-plastic material behavior is deduced. The resulting partial differential equations are solved by appropriate coordinate transformations to obtain closed form solutions.

When heavy plates are rolled, an unwanted bending of the plate ends may occur. This flatness defect is called ski-effect, cf. Fig. 1. Asymmetric rolling conditions (amongst others temperature and friction) with respect to the plates mid-plane cause this phenomenon. Using the Upper Bound Method, a semi-analytical model can be obtained to describe the ski formation. 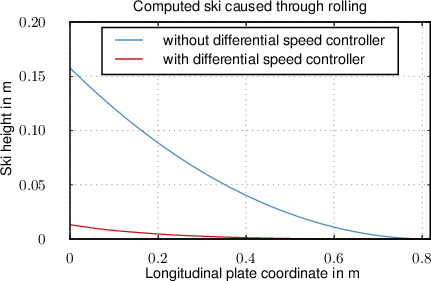 Ski simulation results for a temperature difference of 20 K between bottom and top plate side.

Based on the ski model, nonlinear control strategies are designed to improve the flatness quality. In particular, a MIMO-control concept for the main drives of the rolling mill is developed to control the circumferential speed difference between the upper and lower work roll. By means of the semi-analytical ski-model the necessary speed difference for avoiding temperature-provoked ski-ends is computed.