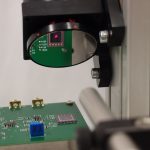 Currently innovation is taking place at the border of disciplines rather than in one individual field of engineering. This particularly holds for application domains that span more than one field of engineering, since a high level of system integration from different disciplines provides solutions that a single domain alone cannot provide. As an example, the combination of optics and mechatronics form the interdisciplinary field of opto-mechatronics. In this respect, the fusion of precision engineering, mechatronic systems and optical components carries a great potential for increasing precision, speed and versatility of 3D optical measurement systems.
The combination of e.g. an off the shelf metrology sensor and a linear positioning axis is always limited by the performance of the standard automation components as for example the intrinsic mechanical mode shapes of the actuator, the sensor components and their mountings, may limit the speed and precision of motion during scanning, and thereby the reliability of the measurement data. To overcome these limitations that arise from component based designs, an integrated mechatronic design approach is needed that considers all system components as well as the targeted application from the very begin of the system development.
The main goal of this systematic integration of mechanical, optical, electrical components as well as control systems into one opto-mechatronic system is to boost the system performance in terms of speed and precision. This holistic system view shall allow to bring the performance of the resulting system as close as possible to the Pareto optimum for the respectively applied technology. Best practice examples of highly integrated systems are state of the art optical lithography systems for the semiconductor industry, telescopes, optical free-space communication, laser scanning microscopy and atomic force microscopes.
The extension of optical metrology sensors towards 3D measurement capabilities with high precision and high speed will enable the development of technologies for inspection tools of future production systems and measurement systems for free-form surfaces. They will particularly be suited for high precision applications and for metrology in flexible production environments, where sizes and relevant features may vary significantly. 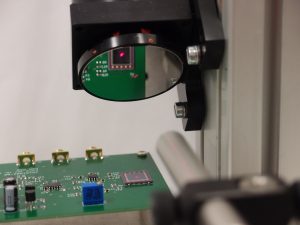 A systematic mechatronic design approach that considers the holistic system view is developed and researched along the design of steering mirror solutions, where both, generic approaches for a general purposes and highly customized approaches for dedicated applications, are considered. Structural design and analysis, actuator and sensor principles and methods, actuator and sensor placement and integration, modes of operation as well as mechatronic design methods are considered in this course to deal with design trade offs and to ensure optimal system performance. Budgeting of several performance parameters that are influenced by multiple system components and by their mutual interrelation is also required, including methods for dynamic error budgeting, predictive modeling and the allocation of phase budget to individual components. Relevant parts, i.e. the components that contribute most to the dynamic error, will be analyzed, e.g. by using finite element analysis (FEA).