Werner is a robot from the STRANDS project, which aims to achieve robust and intelligent behaviour of the robot in human environments through adaptation to, and the exploitation of, long-term experience. This approach is based on understanding 3D space and how it changes over time, from milliseconds to months.

The robot is 180cm tall and weights about 50kg. It was designed by Metralabs and is equipped with a differential drive, two Kinect RGB-D cameras (one mounted on a Pan-Tilt Unit), a 2D laser range sensor, an on-board computer and two additional PCs each with GeForce GT 640 graphics card, Intel i7-4770T Haswell CPU 2.5 GHz and 128GB SSD. To interact with the user, the robot has a touch display, speakers and a movable head.

Werner’s green shell distinguishes him to the other five STRANDS robots, which are Bob from Birmingham, Linda from Lincoln, Lucie from Leeds, Rosie from Stockholm and Karl from Aachen. Apart from yearly gatherings, the robots also competed against each other in the STRANDS robot marathon; an endurance competition in which teams try to enable their mobile robots to run for as long as possible, whilst also driving as far as possible. 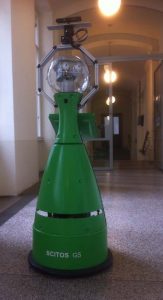