The ability to detect new, moved or missing objects in large environments is key for enabling many robot tasks such as surveillance, tidying up, or maintaining order in homes or workplaces. These tasks share the commonality of operating in the same environment every day. As such, revisiting a particular environment enables robots to utilize domain knowledge and to exploit their memory from previous visits.
By storing a reference map of the environment, a robot is able to check for scene consistency and therefore detect changes on the object-level. A household robot, for example, uses the cleaned-up version of the environment as a reference map to discover objects it should tidy-up. It is only interested in new objects, but not in objects that have a permanent place, such as a a chair, a lamp or computer keyboard, which may move only slightly. Fig.1. A household robot tidying-up a room. It compares a previously acquired reference map to the current state of the environment. Although the chair and other permanent objects moved slightly (colored in green), only the mug (colored in pink) should be detected as novel and therefore tidied-up.

The dataset was recorded with an Asus Xtion PRO Live as part of the HSR robot. We provide reconstructions created with Voxblox[1] from five different environments ranging from partially viewed rooms (office, kitchen, living room) to complete rooms of different size (small and large). For each environment a reference and additional 5 respectively 6 additional observations exist. Between 3 and 18 objects from the YCB Object and Model Set (YCB)[2] were newly introduced in an observation. Additionally, furniture and decoration was occasionally slightly moved. The YCB objects are considered as the ground truth. We provide pointwise annotation based on the reconstruction for each observation.

Figure 1 and Figure 2 show an example scene of the small room respectively the partial office room. 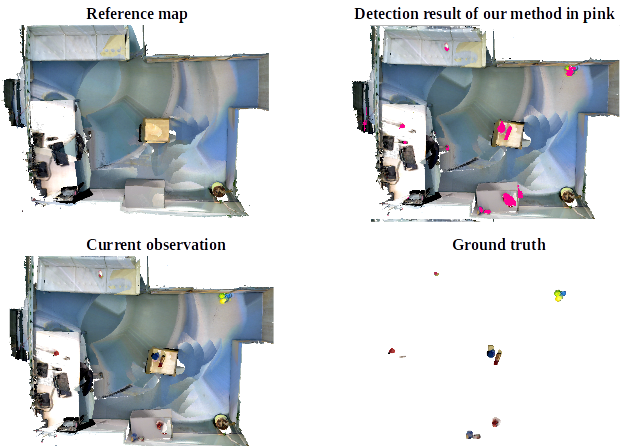 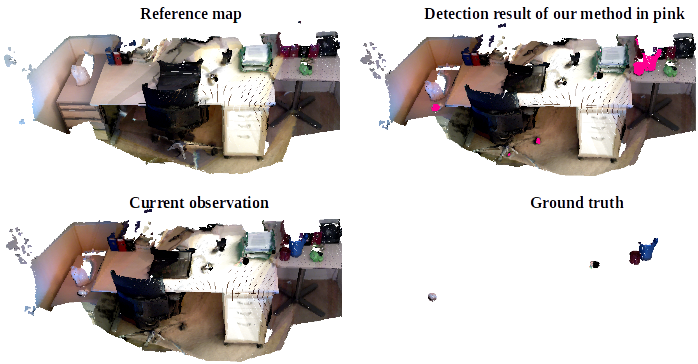 The dataset provided here is a cleaned-up version of the dataset we used to generate the results stated in the IROS paper. We removed all duplicate points from the reconstruction and annotation which were introduced by Voxblox.

Please find the performance of our method on the cleaned-up dataset in the following table. 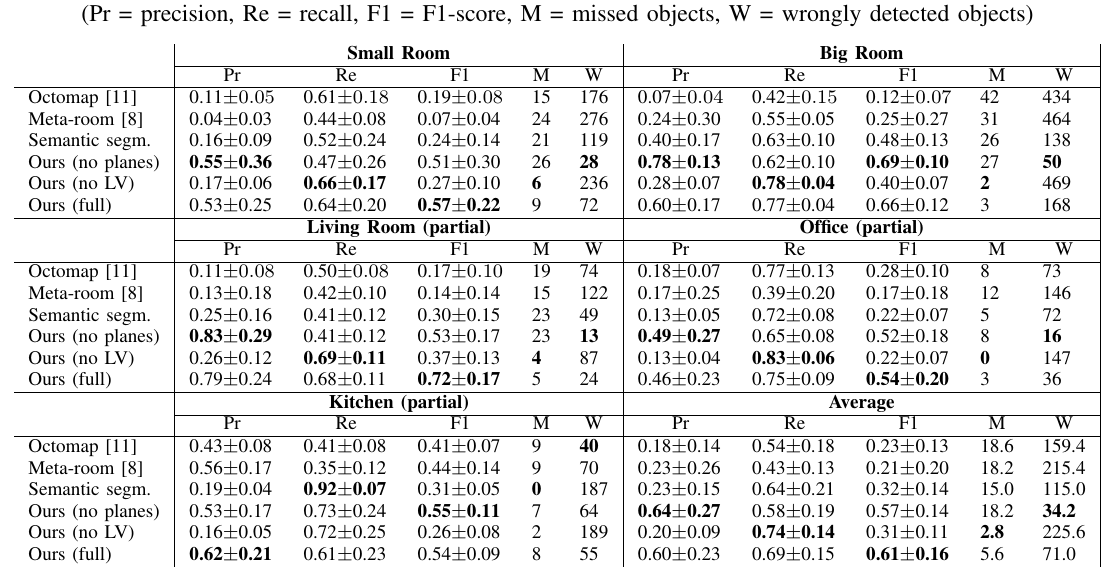 Please contact the author if you are interested in the rosbag files to find a way how to share them (~ 300 GB). Each rosbag contains the tf-tree and the RGB and depth stream, as well as the camera intrinsic.