The SMOT dataset, Single sequence-Multi Objects Training, is collected to represent a practical scenario of collecting training images of new objects in the real world, i.e. a mobile robot with an RGB-D camera collects a sequence of frames while driving around a table to learning multiple objects and tries to recognize objects in different locations.

The dataset consists of two training sequences that contain four target objects per sequence (total of eight objects). The image below shows the training sequences of the dataset. The poses of objects are self-annotated by a reconstruction method after defining the initial pose of each object with respect to the existing 3D models sampled from the YCB-Video dataset[1]. Note that the pose annotations are not accurate as the poses are not manually adjusted to reflect real noise that is expected when poses are annotated by a camera tracking method without strong markers.

The test sequences are collected from three different tables and a bookshelf with different levels of clutter. An example python code that reads RGB and depth images and poses are included (io_example.py). 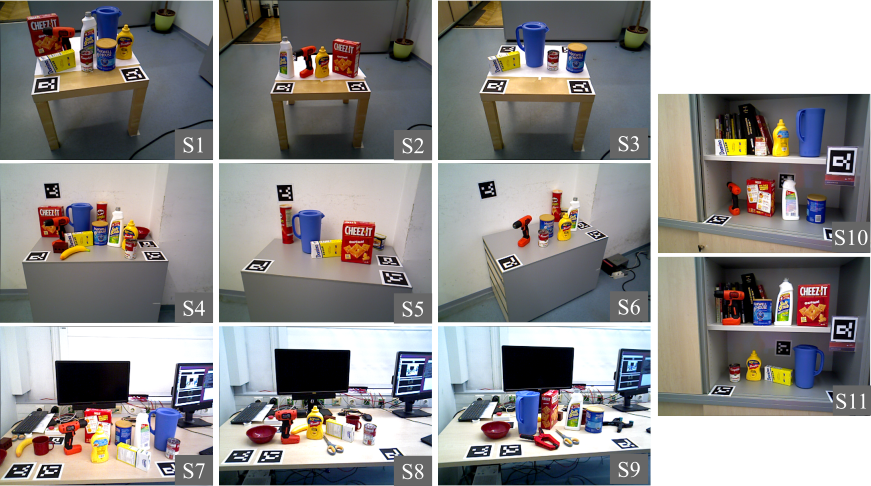 As summarized in Table 1, the ranges of poses covered in the training set are limited compared to those of the test set. This reflects more practical cases that we have to face in the real-world.

Table 1. Statistics of the dataset.

If you found our dataset useful, please cite the following paper.
More details of this dataset are included in the paper and the supplementary material.

For any questions or issues with the dataset, please contact: